Without the dollar sign cashed in as the big winner!

The study was spurred by research showing that when restaurants remove the dollar signs ($) from menu prices, diners tend to spend more.

The testing team wondered if the same could be true for non-profit donors. Would removing the dollar signs on donation buttons prompt donors to give more online?

The team suspected removing the dollar signs, next to the donation button price, would help donors focus more on the good their gift was doing — and less on the actual money they were giving.

However, the team also acknowledged, the opposite could hold true. Removing the dollar sign could create confusion because the ask amount wouldn’t be as clear, resulting in donation conversions.

To determine the effect of removing the dollar signs, an A/B test was set-up and run on Optimizely.

The study ran for 56 days. During this time, 686 visitors took part. Traffic was split 50/50. The user demographic consisted primarily of older female baby boomers, or seniors, living in the United States.

Half of shoppers saw the page with the dollar sign next to the button. It looked like this: 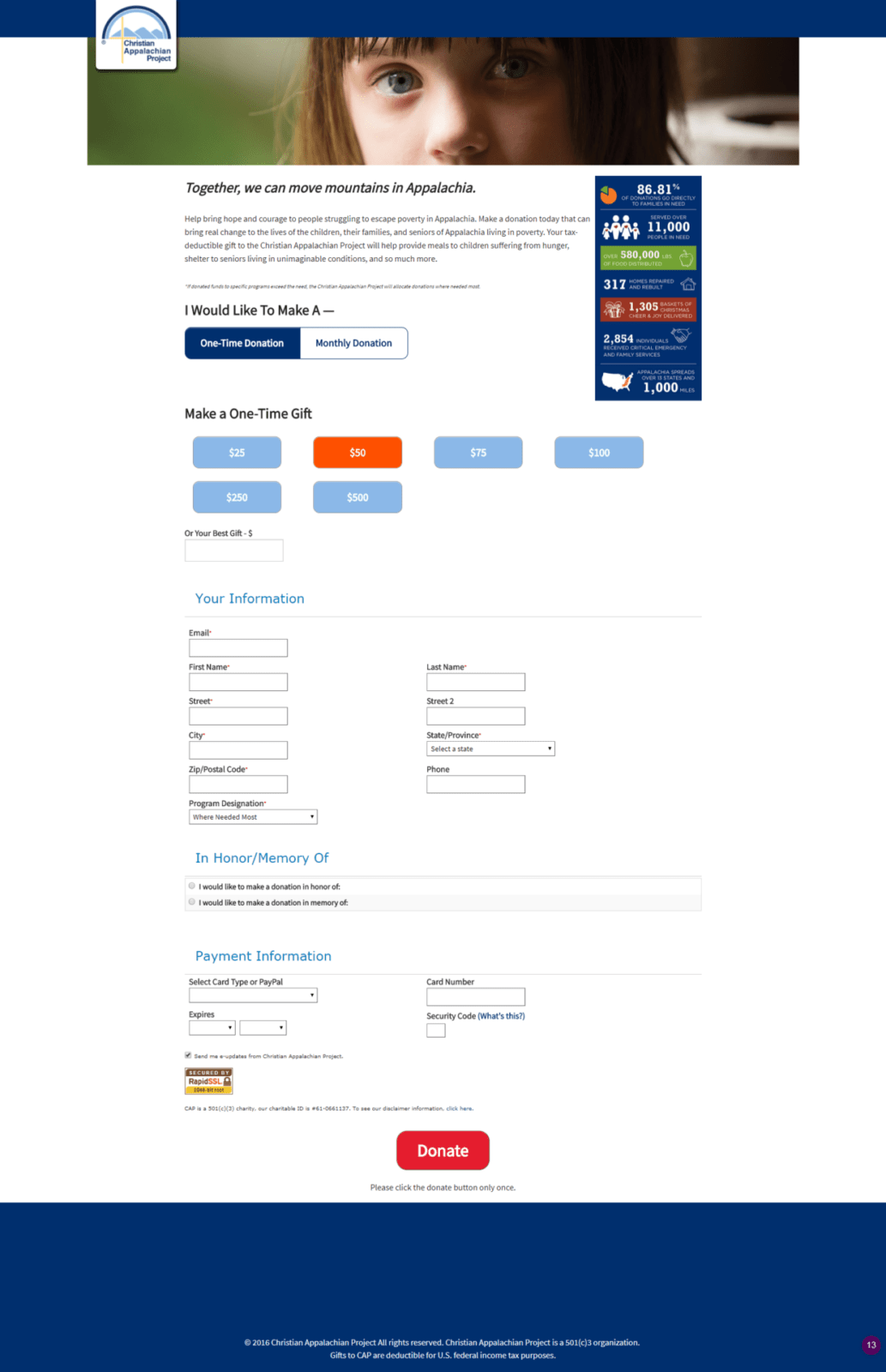 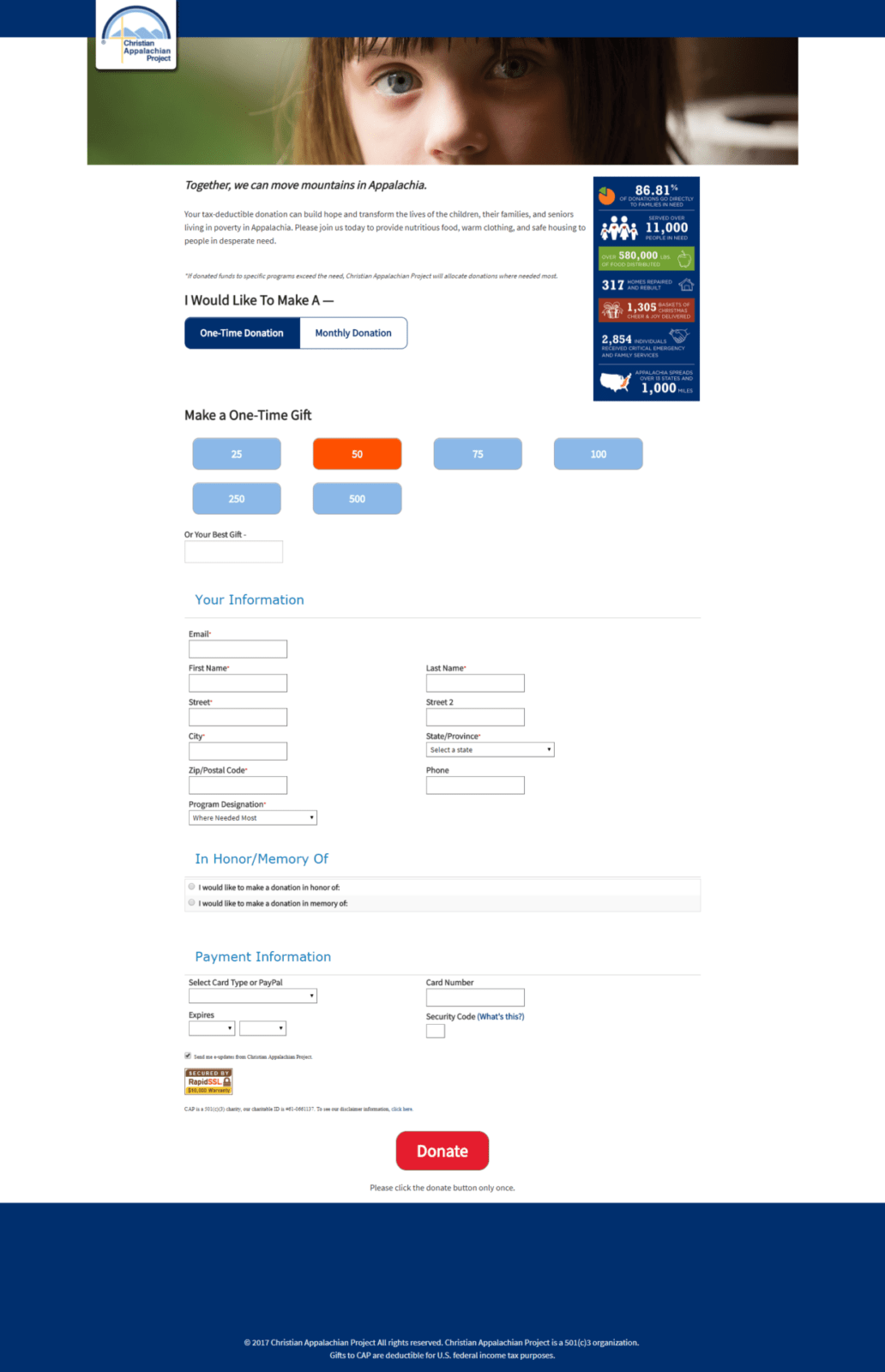 Average gift amount (donation), and Revenue Per Visitor (RPV) was measured across both versions.

Winner: Version B – WITHOUT the dollar signs cashed in as the winner.

Supporting the hypothesis, removing the dollar signs had a positive impact, creating a 13.38% increase in average gift amount. And, a 31.89% increase in RPV. Overall, this gain translated to a 16.43% uplift.

This results chart provides a more complete breakdown of the results:

The sample size in this study is quite small (686 visitors total). Since traffic was split 50/50, there were only 343 visitors that saw each version. That’s not a lot of traffic. 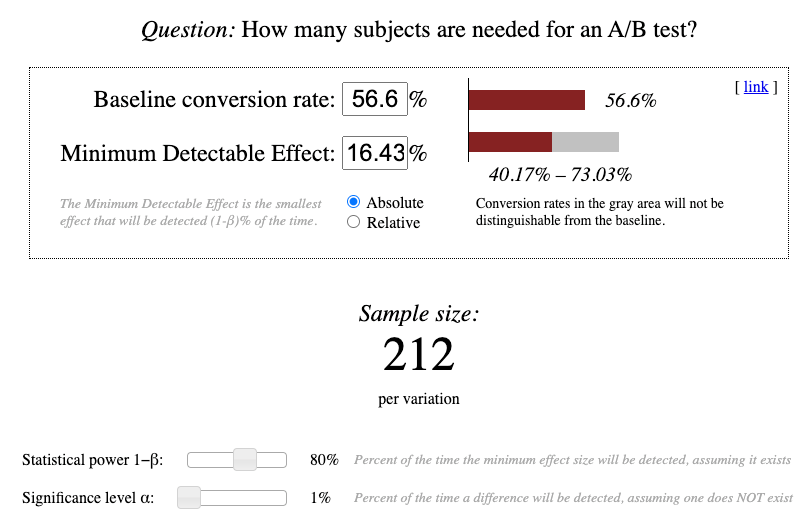 However, it’s important to note, that despite the sample size likely being large enough, if you go to the current site, you’ll now see dollar signs appear on the donation buttons.

This occurrence shows either that further studies found conversion evidence against removing the dollar sign, or someone within the organization didn’t fully trust the results enough to implement them, long-term.

Therefore, the results should be taken with a grain of salt.

As with any case study, if you plan to use this study to inspire your own tests, it’s important you don’t blindly implement this design without first testing on your own website.

Why did removing the dollar sign appear to positively impact conversions? There’s likely a couple insights that can be gleaned:

1. Reduced the “Pain of Paying”

According to researchers Prelec & Loewenstien (1998), there’s a strong connection between purchasing a product and the displeasure, or pain, you go through when paying for the item. The psychological effect is called the Pain of Paying.

The concept is pretty simple: paying for something can reduce the pleasure of making the purchase. In fact, the research shows, spending money activities a part of our brain associated with feelings of pain and disgust.

It’s like the opposite of “retail therapy.” Because, while we may get excited thinking about things we want to buy, that excitement plummets as soon as we have to pay for it.

However, it’s interesting to note that when we use our money for good — like making donations to help people — are brains are actually stimulated in a positive way!

According to research from the National Institutes of Health, giving activates the so called “reward” center in the brain, releasing feel-good endorphins that make us happy.

Since this A/B test looked specifically at reducing the pain of paying in a charitable context, it’s interesting to note that removing the dollar signs likely had a doubly positive impact.

First off, donors likely felt less pain giving because that in your face dollar sign wasn’t there.

And, secondly, once they did give, donors likely felt good that they helped make a positive contribution to alleviate poverty.

You wouldn’t think just removing a little squiggly line in front of a dollar amount would have such a drastic impact. But, a tiny change can truly make a big conversion difference.

In fact, as mentioned earlier, research looking at the effect of menu pricing at restaurants found removing the dollar signs contributed to significantly greater spending, while dining.

This finding adds to a strong body of evidence showing the way numbers are presented can dramatically influence our spending decisions.

In this case, a dollar sign immediately reminds you that you’re spending money. Without the dollar sign, there’s likely less negative feelings associated with paying.

It’s interesting to note, however, the situation may be context specific. In this GuessTheTest case study, removing the Euro sign actually, surprisingly, reduced conversions. Perhaps because there were so many other numbers on the page, the euro sign was necessary to clarify the price itself.

As well, online, if the price isn’t clearly annotated with a currency figure, like a dollar or euro sign, visitors might be very unclear what currency the is, questioning if the amount is in dollars, euros, or another currency.

Confused visitors don’t convert. So, it’s important to clarify this aspect of your pricing structure — especially if your traffic is international and won’t immediately know what currency you’re dealing in.

Taken together, the dollar and euro sign A/B studies show, whether you decide to include or remove the currency symbol is context specific. What may work best for one site, won’t necessarily work on another. So, it’s always best to test.

Removing the dollar sign can help decrease the “pain of paying”. This strategy may be particularly useful in the context of donations, where prospective donors will feel extra good making a helpful contribution and therefore, less painful payment.

However, it’s important to be aware that removing the currency symbol can create confusion. Visitors might not immediately realize the number are the price, and may not know the country currency.

Why do you think the version with the dollar symbol won, but isn’t now implemented on the site? And, what are your thoughts on the sample size? Do you agree it was large enough to get valid results?

Share your thoughts, comments, and questions in the “Comments” section below.

Did you guess the right test? What impacted your decision?

With or without the pre-selected amount?

With or without the free shipping notification?

Horizontal or vertical layout on desktop?

With the checklist or feature box format?

With or without the chat pop-up?